Gutted not to be able to play Coffee Cup this year, but don’t think my back would thank me for 11 games in 24 hours!  Luckily Enderman has stepped in to make the numbers even, as asking a TO to hang around for that long without playing is a bit much.  Jip was in charge of herding the cats into the scout hall, and I popped along in case any technical support was needed (bringing a laptop lead with me, as it turns out…)

The ruleset was pretty basic – 115TV, maximum one star for stunties, none for others, 3 tiers for skill packages.  Each player plays 10 others, randomly chosen, with no Swiss and the schedule decided in advance.  5 stunty teams (3 halfling, 2 goblin) and 2 vampires, then a mixture of others.  The vampires were FatboySlimming, fresh from his 9-0-0 with them at Thrud weekend (7s and 11s) and CeeTee, a great coach who was the first of those 9 and was obviously bitten… 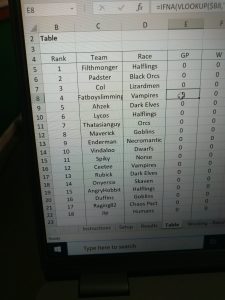 The attendants’ experience ranged from 2 tournaments (Vindaloo) to 267 (Lycos) and ages from 16 (Enderman) to 106 (Lycos, probably).  Raging82 will be recording his games for his YouTube channel, so that should be some entertaining viewing later.  There will be some great madness in the early hours with vampires v goblins game 10, so I’ll hope to pop back for that one!

Round 1 in full swing in the photos below.