A short roll of honour for the Sann Clan’s triumphs on the pitch! 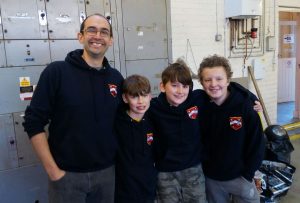 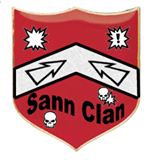 With all my NAF shields, I have modified them to represent the tournament at which I won them: 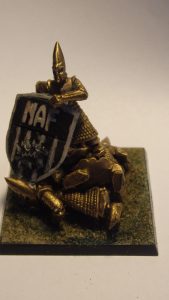 Bubba 2016 – there was a Highest Elf competition, where 4 or 5 coaches out of 20 or so took High Elves.  I went 3-1-0, so was Highest Elf, and also won the tournament.  Also my first as NAF President!  Thanks to Twelfman for providing the golden elves, and sorry for butchering the original plinth that they were on! 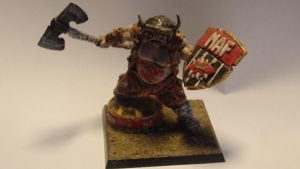 Next is Thrud 2014, and another bit of butchery, as the original figure was a fairly limited edition Ogre Ninja.  But he has pride of place in my trophy cabinet, and there can be no higher honour!  This was with Lizards, and I went 6-0-0, including a memorable 6th game against Halflings.  Good Halflings, but still Halflings… 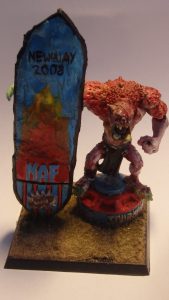 This lovely chap with a surfboard was my first NAF win, Newquaybowl 2008, with Norse.  He’s meant to be a Snow Troll, but has caught the sun a little. 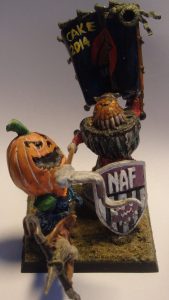 Cakebowl 2014 was also with Lizards, and this trophy started life as my NAFC Duel entry for that year – it’s the Cakebowl mascot fighting with the ARBBL mascot (the Pumpkinhead), and obviously winning! 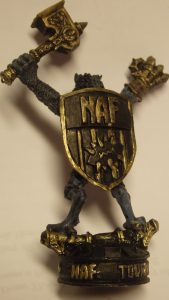 The two above are back and front of the trophy from Bunker Bowl 2016, won with Necromantic in my quest to become good with them before Eurobowl.  Went 5-1-0 in this one, including another stunty round 6, this time against goblins.  A memorable quad skulls from Podfrey was a highlight of this tournament!  The Griffon was because it was run by Mr HowlingGriffon.

Finally Thrud 2016, but this one’s a bit different as it was won using Belly Smalls, the world’s most broken star player, so the shield has been trampled beneath the rolling fat man, while his drunken nun friend eggs him on. 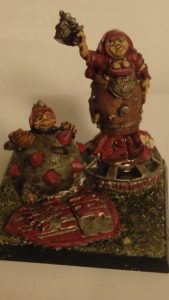 After a bit of a break (not from tournaments, just from winning), I took Undead to Exebowl 2017 and had 3 good games – beating up Jordell and his Pro Elf friends, then demolishing some lizards after my dice lit up around turn 6, and then having the joy of some slann who decided to bring a knife to a gun fight in going head to head.  3 wins, and strength of schedule gave me the trophy. 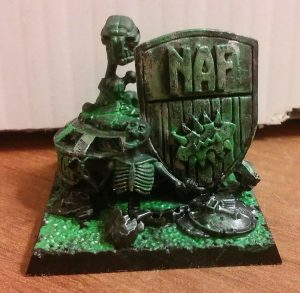 And a group shot to finish, in a custom stand, supposed to look like the stands of a stadium. Doesn’t quite work, but good fun! 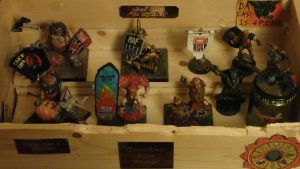 Thanks to NAF website, the roll of honour can also be seen on my NAF Coach page, along with a load of tournaments, some of which I actually organised, but most of which I did the admin for so they currently appear on my record.