Mulling over what I would change about Eldene if I could click my fingers, here is a quick list. This doubles as a list of projects that I would want to move forward if elected – not much is in direct Parish control, but part of being an elected representative is trying to influence the people or bodies that can decide things!

A straw poll of residents suggests that parking is the number one issue locally.  This causes traffic problems and damages the grass as well as being frustrating when people can’t find somewhere to park.

The causes are fairly well documented, and are to do with a lack of decent public transport and more cars per household than there used to be, as well as more vehicles for home working than when the estate was designed.  The solutions are harder to implement!  I talk about public transport below, but equally it may be that there is a good case for creating more parking, and it is certainly something that the Parish Council should have in the back of its mind when discussing how to improve the area, which should probably be one of its reasons for being.

This may be a personal one, but it has always seemed odd to me that the path around the North of Eldene Drive stops where it does, instead of carrying on round to Morrison’s, as shown in the blue line below (M for Morrison’s).  I would want to take this forward in terms of costing it and seeing if it’s possible to do. 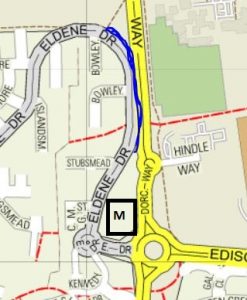 In an ideal view of the world, the newly turfed Eldene beach, the school, the Crumpled Horn and the Community Centre would be working together to make Eldene Centre a proper beating heart of the area, and would love to see a working group set up to make this happen.  Very happy to acknowledge that this sort of relationship might already exist, in which case some of the other items on the list might be easy to implement!

It has always seemed strange to me that there is no obvious route to get to Morrison’s if you are at the square in the centre of the Meads.  There are pretty much 3 options, shown in the graphic below. 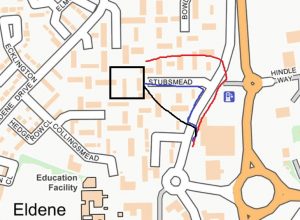 The red route is the most pedestrian friendly, and it involves walking towards the underpass and crossing by the bus stop.  The blue route is another option, which involves walking along Stubsmead, which has a significant parking problem and very little good pedestrian routes.  The black route means going through the houses and then crossing over a patch of grass.  I believe the black route was not paved when Morrison’s was built so that it did not encourage people to take this route past the row of houses, but it is one of thos situations where people do it anyway, so a better solution is probably needed.  One to think about, anyway!

As a keen Facebook user, it seems very strange to me that the Parish Council does not have its own Facebook page.  The main effect of this is that the Chair gets tagged personally on Facebook whenever someone wants to flag something to the Parish Council (e.g. fly tipping), and also that Parish Council communication comes out through an individual’s Facebook account (usually the Chair’s).  This does mean that the Parish seems to be represented by one person (the Chair) rather than being a collective of nine people, which does not seem very healthy.

The two main bus problems are the lack of a direct bus to Old Town and a direct bus to the Hospital.  It would be great to keep pushing for these important transport links to be put into place – obviously not under direct control, but a nice to have!

Connected to the Eldene Centre being a hub, it would be great to have things like summer gatherings, jumble sales, that sort of thing.  Definitely one that the Parish Council can help organise!

The parish website has just had a redesign and is looking great, so the Council and the Clerk should use it in conjunction with social media to get parish information out as much as possible, to build engagement with the Parish Council.

The big one at the moment is Charles MacPherson Gardens Wardens, but there will always be specific issues that Parish Councillors can support with.  The big one here is about knowing how various things work, communication with Borough Councillors, and so on.

We have some great local businesses in Eldene, and it would be good to support them with advertising and so on.  This would all help to raise the profile of the area.  Again, maybe this already happens!

Eldene Drive can be a bit of a race track on occasion, though average speeds are within the speed limit.  There are patches such as the mouth of Ecklington where parking on the Drive makes driving quite difficult, though actually this has the bonus effect of slowing cars down!

Suggestions such as “speeding reminders” or a crossing at the location shown below would be worth investigating. 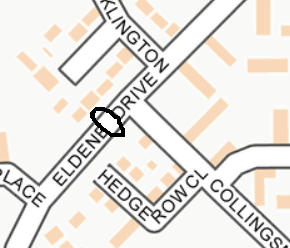 So there we go!  If you’ve made it this far, thank you for reading – would be great to hear from Eldene residents as to whether you agree with this list or think I’m barking completely up the wrong tree!

As I said at the outset, I’m fully aware that most of these are not under direct Parish control, but that’s no reason not to put them on a wishlist…