Following on from part 1…

Game 4 was against the Swedish Whine Squad, and a bit of as pasting as a team with only Ronaldbeanio managing a win.  The critical moment of his match was his chaos dwarf opponent setting up with 12 players.  It took until turn 2 to notice, so the mino was promptly sent off!  After a check of the FAQ and a roll of a 6, luckily for him he went to reserves rather than off the for the rest of the game.

I was against orcs, and was a bit disappointed when my line of scrimmage all left the pitch, along with the blitz target, so 4 off the pitch in turn 1.  It was a struggle after that, with the only glimmer of hope being when a 2 dice blitz was left for my bloodspawn, who promptly rolled a useless double both down.  Bizarrely, my one turn score attempt was again marred by a freak kick off result as an officious ref took out a key cog in the machine.

In the second half he rolled a blitz on the kick off and killed my bloodspawn, so I was a little sad.  Made good progress up the pitch but an opportunity to surf two of his blitzers didn’t come off and I was left in a pickle.  The wheels quickly came off and the last 4 turns were a write-off.

As a team we then headed back to the lighter, airier and quieter second room and played the Fumblebrewskies, though one of them had to head home so Bron had a bye.  He was offered a NAF ranked game but decided there were better uses of his time. 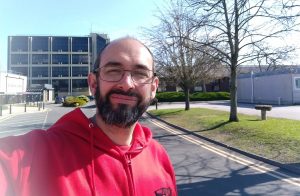 My opponent’s skaven team mostly decided to leave the pitch, though a single lineman put up stiff resistance and scooped up an unhelpful scatter to score, meaning the pressure was on to score quickly in my half and then turn him over.  Luckily, he was out of rerolls, so a single dice skull finished his drive quickly.  Ronaldbeanio had a torrid time against a goblin bomber, but it was a comfortable team win and we were back in the darker, stuffier and louder top room.

Squad Tzeentech were part of the Squad Chaos collective, and were all playing greenskins – Orcs, Black Orcs, Underworld and Goblins.  I was against Throgg’s Underworld and his uncooperative Troll, who decided to start the game with a double skulls.  This led to a fair amount of pressure, but the gutter managed to sneak free and survive a blitz, only to fail a 3+ dodge on the next turn, so I was able to go in 1-0 at the half and in a comfortable position, only marred by my bloodspawn having been fouled to death.

The second half should have been straightforward, but was not to be, as a two dice uphill on my blockless ball carrier popped the ball free.  Luckily the scatter was favourable, and eventually ended up on one of my Bloodseekers, only for another two dice uphill to again work!  A goblin sneaked in to retrieve, and then survived a five dice blitz to head for the end zone, though couldn’t reach it.  He didn’t survive the next three dice, but by this stage the gutter runner was standing next to him, and was able to catch the bouncing ball then run in the 4+ 2+.

More about that gutter runner, however. Earlier in the drive he got stabbed to the KO box due to a Prayer to Nuffle, and like the nice person I am I reminded him a) that he had an apo and b) that he could change the KO into a Stun!  Won’t be making those mistakes again (kidding, of course I will).

Similarly, didn’t help Ronaldbeanio’s cause when I reminded his opponent that Goblin Trolls are now 3+, though that counteracted an earlier correction about a 6 on a Throw Team Mate not affecting the Scatter.  Probably brings up an interesting philosophical point about when it is OK and not OK when spectating to point out a rule misunderstanding.  I assume it’s usually for the best!

3 draws and a win for Barnacles meant a team win, and we finished on 312, which was certainly respectable.  Barnacles was Star of the Car on 402, Ronaldbeanio and I both on 231, so a positive result, and Bron on 213 or 113 depending on whether you include the bye…

All in all, a most excellent weekend.  Team tournaments are the best, as I’ve said before, and this was a good one with a good team!  I’ll definitely be using Khorne again at some point, as the mass Frenzy is much fun.  Obviously they need a couple of beer pigs to be a fully rounded team, but you can’t have everything…