It’s been a good day!  The sun has shone, people are playing tabletop BB in tournaments again, and I have been bought some pints, so apologies in advance for any typos.

Interesting things have been happening.  Vampires coaches by FatboySlimming won the 7s last night and are winning the 11s at the half way point.  Lots of pro, managing animal savagery, and 2+ hypno gaze removing all skills from the gazed player is a potent combination it seems, leading to a current 9-game winning streak by FBS.  Top 30 are below, and the full standings are on the website. 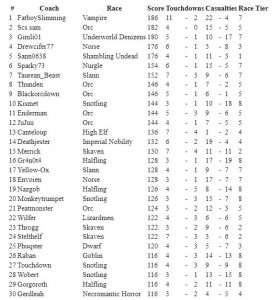 There were worries beforehand (by me!) of a halfling tournament win, but that doesn’t look to be manifesting itself, possibly partly due to “tier” being first tie breaker after total score, which is an interesting way around the “stars problem”.

The orc teams did not have access to stars, Gimli is using “Drunken Thrud”, a ball and chain star, and Sparky is using Gymir, who is basically a fouling goblin.  Top stunty is current Kismet’s Snotlings with Morg and Varag, so will see how they perform tomorrow!  All the rosters can be found here.

One of the highlights of day 1 was Nazgob setting up with 13 players and his opponent (as per the rules) choosing to send off Morg and Griff.  The game was not close.

The auction is about to start, after everyone has filled themselves with meaty goodness.  Follow Thrudball on Twitter tomorrow for latest updates!