Having now used vampires in a tournament, thought I would stick some words down about them.  I went to the Super League Showdown, a squad tournament hosted by Wobert, one of the best Tournament Organisers around in terms of enthusiasm, swag and organisation.  6 teams of 6 from leagues near Cheltenham gathered at IncomGaming for 4 games using draft rules from Eurobowl 2022.

I took 5 vampires and 9 thralls.  One blodge vampire as ball carrier (stacked primary counts as secondary), 3 pro vampires and a leader (secondary).  2 block thralls, one tackle and one dirty player (I would have swapped the tackle for frenzy with hindsight, as you can get rid of the opponent’s dodge using hypnotic gaze instead).  We played that Pro could not be used while prone, which is (probably) the correct interpretation of the rule until GW say otherwise. 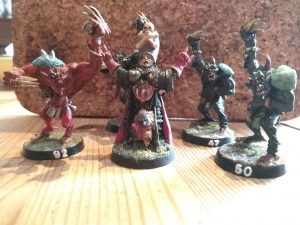 The two major elements of vampires are gaze and animal savagery (AS).  Gaze now works on a 2+ and removes (almost) all skills from the opponent, meaning for example I could gaze my opponent’s blodgestep blitzer and then blitz him with a block thrall, which felt very strange but is the way the rules work.  I also thought about surfing my opponent’s treemen as well, but there wasn’t actually a need (apart from the fun…).

AS means that if you are blitzing or blocking you roll a 2+ and if moving (and thus gazing) you roll a 4+.  If you fail you knock an adjacent team-mate down (thrall OR vampire) with the associated armour and injury roll.  If the armour is not broken then the knocked down player can then get up and move, if they have not already moved that turn.  Importantly, AS means that the vampire will always do the action that is required, so when my ball carrier was in scoring range and had someone next to them, there was no chance that they wouldn’t be able to walk it in, just that they might have punched their own player on the way (which didn’t matter in turn 16).

One thing I quite often did was keep my pro vampires isolated, if it didn’t matter if they moved or not (i.e. they were approximately in the right place) – it was then a 4+ to move, with a 3+ pro reroll, and so if they could be in a marginally better place that was good, but if they failed they didn’t actually attack anyone.  This is similar to the wild animal but with the lost tackle zone (which was usually irrelevant).

In terms of my games, there were 2 informative ones and 2 less so.  I started the day against a fairly new undead coach, who used guard well to protect the ball carrier but got worn down by the frequent attacks.  At this point I’d forgotten about removing blodge from the ball carrier, which would have made a bit of a difference!  He ended up getting the wooden spoon but it was a fun game.  One of my other games was against a starless halfling team with 6 rerolls and two frenzy trees, who managed to win two games in the day!

Of the other two games,  one was against Skaven with Glart and Hakflem, dropping 2 gutters and blitzer to fit them in.  I knocked Hakflem down a couple of times and put the DP boot in, but wasn’t able to remove him.  Glart probably blitzed 12 times in the game, doing a fair amount of damage, and the game could easily have been a loss, but finished 1-1.  The worst thing Glart did for his team was double pow on the one turn attempt!

The final game of the day was Elven Union with mass dodge, and this is where the Vampires’ box of tricks came into its own.  On my drive I had a S4 blodge carrier, and the elven column defence was fairly useless because it could just be gazed through.  Combined with the ability to remove skills and blitz, I can imagine it was fairly frustrating to play against!  On my defence it was very difficult for the elves to build an attack as they were short of players, making caging tricky, and if they threw catchers forward as receivers (hoping to make use of nerves of steel) then I could just gaze them, meaning they can’t catch the ball.

So, just a couple of very meaningful games, but the evidence is building that vampires at a lower tier are dangerous.  Fatboyslimming’s Thrud triumph was impressive (going 600 and 300 in sevens) and provides more evidence that multiple skills and stacking makes Vamps powerful.

The important thing about this tournament was that we were using draft Eurobowl rules, which had vampires in Tier 7 of 7, along with goblins and snotling, and below halflings and ogres!  If this does not change I would be amazed if all the Eurobowl teams didn’t have a Vampire team, which wouldn’t necessarily be a bad thing, but it was certainly a very strange form of Blood Bowl.  A bit like playing against 14 players when facing Underworld or Snotlings, I guess.

The next lot of evidence will be interesting – how will they do in the first big NAF Fumbbl tournament, kicking off today (I’m using them, and would guess others are too), and then how will they fare in the big tournaments – Waterbowl, UKTC and NAFC I’m thinking primarily, though not sure if there are any at Chaos Cup this weekend.

Finally, were they fun to use?  For me it slightly reminded me of when I used a broken star to win Thrudball in 2016.  That star had been designed by an absolute madman to fit with a bonkers tournament that focuses on raising thousands for charity.  The new AS and Gaze has been designed by the core writers of the game.  I’m also not sure how much fun it was to face, apart from my sparkling personality of course!  I did come away with this shiny though, which is always nice. 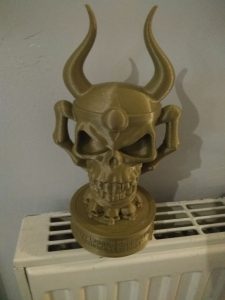