Christmas holidays were upon us, so time to do a foolish modelling project!  We’d lost a Cluedo piece, and a friend of the daughter was claiming to be colour blind (she wasn’t, but that’s another story) so was inspired to raid the bits box.

Cluedo (“Clue” in America, I believe) is the classic game of guessing who did the murder, and it was time for a fantasy version!  The original pieces were Miss Scarlet, Miss Peacock (blue), Mrs White, Colonel Mustard, Rev Green and Professor Plum, but the more recent boxes have given all the characters random back stories, so no time like the present.

Mmmr Plum* is an executioner by trade, which in normal circumstances might make him a prime suspect, but in the world of Warhammer doesn’t mean he’s more dangerous than the average denizen.

Goblin Green is trapped in the past, reliving his prime when he was omnipresent on bases. A small fella with a big attitude problem.

The Peacorc is one of the lesser spotted blue orcs, to fit the pun.  Growing up he was bullied by the greenists, and has a massive chip on his shoulder to go with his massive golden fist. 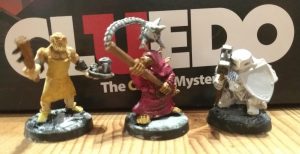 Colonel Mustard is a retired army chef, leaving the pay of the Empire to open the Sigmar’s Head, a pub on the outskirts of Talabheim.  Friendly to regulars, but don’t cause trouble or you’ll get a clubbing!

The Scarlet Skaven, the Red Rat, once thought to be a legend, but mysteriously appeared when the great plague arrived in 2020, waving his censer to warn of the oncoming devastation.

And finally, needing no introduction, the White Dwarf! 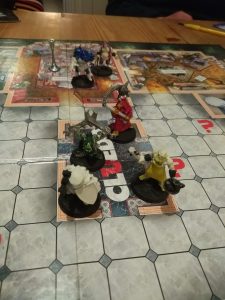 Game 1 was Mmmr Plum, in the Kitchen, with the Candlestick.  Which obviously begs the need for an updated board and set of weapons as well.  Forget Heroquest, this is the obvious mash up between GW and MB games!

*bonus points if you got the Tim Vine reference.