I have been thinking recently about the use of Facebook in local politics.  This is not a deep cover Cambridge Analytica style data mining investigation, it’s a lot simpler than that, and is to do with who are the Admins on local Facebook groups and who they allow into the groups, and I think it could be a fairly significant problem in local politics.  I should say that I am standing as of this moment to be a Parish Councillor for Labour in the Eldene ward of Nythe, Eldene and Liden Parish Council in East Swindon, which is what has brought this to mind.

A note first on the difference between Pages and Groups on Facebook, as people often do not know the difference.  A Page is set up to represent a person’s “professional” persona or an organisation.  As an example, I have my own Facebook personal profile, then I have a Page for my political stuff, a Page for gaming, and have set up Pages for Am Dram organisations and my local church, for example.  Pages are usually very obvious what they are for, and are not problematic, people just Like and Follow them if they are interested in what the Page has to say.  It is possible to post on a Page, but usually the Page will post something and then people will respond to it.

A Group is a different thing – it is a collection of people with a common interest.  You “join” a Group, and once you have joined everyone can post.  A Group will have a team of Admins and Moderators (which I will shorten to Admins) who approve or block members of the Group and sometimes have to approve a post.  If posts do not need approval, there will certainly be a set of rules and posts that do not meet those rules (e.g. relevance, politeness) can be deleted.

A particular subset of Groups is those that serve a common area, and you can find examples of such Groups here. 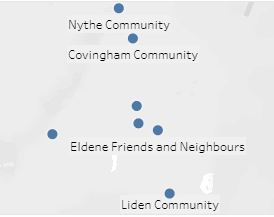 They are often called “Place Community”, and are either set up by well-meaning local individuals or local politicians who serve the given area.  If the former, great, but the problem comes when politicians or individuals with very particular political views set up the Groups and then run them with their own set of undeclared biases.  When this happens, the local community may be expecting a non-partisan local view, but instead is getting a curated slice of local news.  This would be similar to only getting news from the Telegraph or the Guardian, when you were expecting the BBC (if we assume the BBC to be neutral, which is a separate conversation…)

Poor behaviour from Admins in these Facebook Groups can include:

I set up a local Facebook Group over a decade ago, and always strived with my team of Admins to make it politically neutral, which was especially difficult because there were unfortunately people who lived in the area representing some strange views.  We allowed criticism and promotion of viewpoints as long as they were not offensive or illegal.

While it is too late to bring this issue to people’s attention for this week’s elections, I believe that using Facebook Groups in this way is immoral, though obviously not illegal.  If you are a member of such Groups, maybe have a look at who the Admins are and simply post in the Group about any political affiliations they might have?

Finally, a caveat to all of the above.  Local Facebook Groups are a good thing, it’s hard work sometimes being an Admin, and I would not want people to stop.  Also, I am very aware that not everyone is on Facebook, and this may well be regarded as a minor thing by lots of people, but Facebook is one of the major global communication tools, and I believe it is incumbent on those in local politics to set a good example and behave honestly and openly wherever possible.